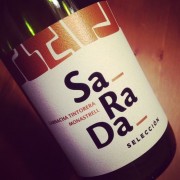 Dark cherry color. Nose of smoke, small black berries and a handfull of spice notes. Powerfull yet controlled it does offer nice fruit flavors, some spices and a touch of smoke. The acidiy adds to its balance. Interresting wine and low priced, making this wine more attractive. Good+ (88)

Made of 60% Garnacha Tintorera and 40% Monastrell. Aged 12 months in French oak barrels. Alcohol level of 14%

Represented in Québec by: sdvf.ca

In the wine business, there is a common way to taste wine and it’s called blind tasting. This way of having wine consist of tasting wine without knowing its name or origin. The results can often be unexpected, but the main reason why I like to taste wine blindly is that I have reference while tasting it, so anything can happen, even mistakes on which wine it is! It is then judge only on this moment perceptions. The truth is in the glass…

It is a fact that perceptions or feelings can change in regards of the moment of the day, where we are, the people we’re with or even if we’re tired or not. Despite all this, I still think that blind tasting is the best way to be objective on a wine while tasting it.

The most popular tasting ever done is probably the “Judgment of Paris” in 1976 where some of the greatest French wines battled California wines. Everyone there had the conviction that the French wines would win easily, but that was not the case! To learn more about this tasting, here is an article on Wikipedia.

Ok, let’s talk about wine, the whole reason for this article being giving you the results of a tasting I did with “neophyte” tasters, my friends! I had invited them at home for a supper (and to let our kids to play together) and to taste some wines!

At the beginning I didn’t gave then any information about the wines they were having neither their origins nor their price. The goal was to get their impressions of the wines. I did afterward gave away the country then the prices. After that they guessed which wine each one was before giving the answers.

Here is what was poured:

Fogo Portugal (only available in grocery stores for 10,19$)

I did not made any « official » grid to gather all the scores, but off the results, one thing is sure, everyone had the grocery store wine right. The surprise came from the swap over the Chianti and the California wine.

Here are some comments on the wines :

Dark color. Nose of cherries, dark berries and smoke. Easy going on the palate with fruit flavors, sweet spices and a proper acidity level. At first it was the most interesting wine out of the bunch, not being too charming or easy, but after an hour or so, its origin showed more with notes of brown sugar and sweet fruit flavors. Very good (89)

Light ruby color. Nose and palate of sweetened red fruits. A little too easy, short, but in the end not bad and was not crushed by the other wines, even if it didn’t stepped away… Good (87)

Clear ruby color. Initially green, very spicy and a little harsh, air did brought classical notes of berries, earth and even some flowers. Long and tasty finish. Showed best almost 4 hours after the bottle opening. This could age and to be enjoyed from now, it has to be put into a decanter for a minimum of an hour, maybe two, since I really liked the last glass from the bottle. Will taste it again with the proper treatment. Very good+ (90)

Everyone liked this tasting game and I will host more of them with other type of wines sooner than later !

Thanks to Société de Vins Fins,  Trialto and my friend Roxane for the bottles of this tasting

Dark ruby color. Oaky and spicy nose at first, but after some air, black berries and leather will appear. Powerful and tasty, the oak is better integrated on the palate with black fruit and leather again. Good acidity level, long finish slightly bitter in a noble way. Could age for few years. Good+ (88)

Dark ruby color. Nose of wild berries, spices and earth. Smooth on the palate, quite tasty, drinks pretty well with a spicy finish. Well-made and offered at a very attractive price. Good+ (88)

Video of Sandrine from Vins Balthazard agency with Carlos Ferreira from Café Ferreira while having this wine (in french only) : 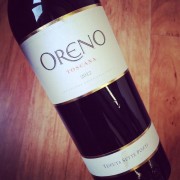 Very dark color. Nose of spicy oak, black berries in a deep and complex way. Really tasty, young, long, with fruit, spices and oak being there, but the balance keeps all the flavors underground control. Will become a great wine. Excellent (91)

Tasted during an event hosted in Réserve et Sélection offices.

Ruby color. Nose full of fruit, spices and bacon fat notes. Palate loaded of fruit flavors, spices and is very complex. Will change constantly with air with a tighter finish, a sign that the wine is still young. Excellent+ (92)

Represented in Québec by: maitredechai.ca 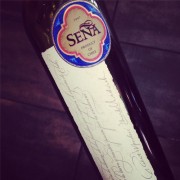 Dark on its center and orange on the rim. Beautiful aged Cabernet Sauvignon nose, almost Bordeaux-like. More rough on the palate, austere and less pretty. Overall it was a good wine event if did not reached my expectations. Very good (89)

Represented in Québec by : markanthonyfinewinemerchants.com

Garnet color. Aromas and flavors of wild berries jam, aromatic herbs, serious while being pleasant to drink. Long and tasty finish with some heat, but so young. Nice classic style and well priced. Very good (89)

Represented in Quebec by Glou : glou-mtl.com

Slightly gold color. This wine shows aromas of poached pear, spices and quite present oak. Round mouth with tropical fruit, grilled nuts and smoke. Long and tasty finish, balanced even if feels quite “powerful” for a white wine and the good presence of oak that tends to tone down with air. Still young, but very good! Alcohol level of 13,5%. Very good+ (90)

Available through private import at Séguin-Robillard