Beautiful golden color with numerous fine bubbles. Nose and palate of toasted bread, apples, candied lemon, there is also a salty and mineral touch complemented buy what feels like oak notes. Great concentration, this wine last a good moment in a long finish. May not be the best Champagne I had from Cédric Bouchard, but this really really tasty! Excellent+ (92)

To learn more about the different wines made by Cédric Bouchard: paris-champ.fr/cedric-bouchard 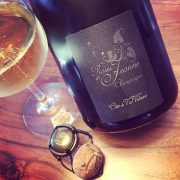